A smattering of updates

So it's been a while since my last blog post and I thought I would write about what's been happening, even if I don't have a new web design article in the pipe. I never plan design articles, they usually happen by serendipitous inspiration while building something, as I come across something clever or particularly elegant. Then they usually write themselves in an hour or two depending on how many embedded examples they have. So far since my last post it's been pretty quiet on that front.

My Virtual Keyboard Interface user JavaScript passed 30,000 downloads at userscripts.org! I didn't think much would change for this script since many months ago, but surprisingly I've done quite a bit of work on it, mostly at the recommendations of loyal users. Some of the highlight changes that I've done since I blogged about 10,000 downloads are: Clickless mode, automatic positioning above or below the input, and the ability to easily resize the keyboard. Also, fourteen new keyboard layouts were added! I'm up for maintaining this script for many years to come, as long as people find it useful

Thanks for your support! 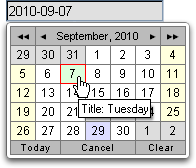 Another form-related script I just finished working on recently is a calendar date selection tool that attaches to form inputs of type="date". I've really needed a simple implementation of this for some time now, but I've always settled on using scripts I've found online to do the job. Invariably they end up being either too complicated, or butt-ugly.

I wanted something I could just drop in without editing the associated form elements, so I finally took the time to build my own implementation. It's designed to work with the HTML5 date input type which is really only supported by Opera at this time. This is a great thing because it enables you to use the date input type freely in all browsers, even though IE, Firefox and Safari have zero support for it. The other thing it's designed for is for sheer simplicity, for both users and developers. It contains no images, no huge list of configurable options, and does not require you to add <script> elements beside each form element you wish to enable. Give it a try and I'm sure you'll love it

My buddy Don introduced me to Christopher Baldwin's fantastic comic strip, Little Dee less than a year ago. I was immediately enthralled with the strip—wondering why something so fresh and finely crafted was not in newspapers—and read through the entire archive. I bought three original artwork strips from Christopher in my enthusiasm and gave two to Don as a gift. However, I was kind of frustrated by how difficult it was to find the strips that were left for sale; the archive was structured only for viewing by week without any way of seeing only the ones still available.

Since I know a thing or two about PHP and databases, I contacted Christopher and offered to rewrite the archive in a format that would make it much easier for potential purchasers to browse. After a few weeks of on-and-off development, I am happy to say that Chris formally announced the new archive system for Little Dee, along with a separate section displaying only strips still available for sale. I recommend you check out the strip which I think is one of the best family-friendly dailies you may have never heard about. Oh, and buy some strips! Little Dee as a strip concluded earlier this year, but Chris has moved on to a new project called SpaceTrawler of which I have become a big fan.

What else? Don's webcomic, Road Apples Almanac turns a year old this weekend! I've learned a great deal about the webcomic community this past year, and I look forward to many more years of enjoyment! In fact, I might be helping a second artist online with his comic endeavours before the year is up! It looks to be an exciting year ahead. We've signed up for a small table at TCAF 2011 and with luck we'll get it. Maybe we'll see you there

This November will mark eight years since I started working for Evertz Microsystems. In that time, I've moved twice, dated and broken up twice, and redesigned my website three times. In that time, I made nine public widgets, watched Wikipedia and YouTube grow from nothing into phenomenons, bought a lizard (and adopted two more!) and joined Twitter. Working at Evertz has been (and still is!) a joy, and has been one of the few constants in my life. At the risk of sounding like a shill, Evertz is a great company to work for, at least in my department

I've met some great co-workers who've become fast friends, and said goodbye to a few who left for other opportunities. Here's to many more years to come! (Supposedly I get an extra week of holidays after ten years

That's all for now. Time for a third cup of coffee today...